Exploration
Puzzles
Anemo Rings are white, glowing rings that accelerate the player upon gliding through them. They can sometimes be found in the open world, but are more commonly seen as temporary gimmicks created upon activating Anemo Pinwheels, Anemo Monuments, or certain Time Trial Challenges.

They can give a brief boost in movement speed in one of the two directions the ring is facing, whichever one is closest to the direction the player is already moving in. Usually, multiple rings are set up in such a way allowing the player to pass through several in a row, creating a consistent speed boost.

The rings can boost in the horizontal or vertical directions, but also at various angles in between.

Venti's Elemental Skill is a fixed animation that does not count as gliding. Once the animation ends, or it is interrupted, he can glide and air rings will have their directional effect on him. 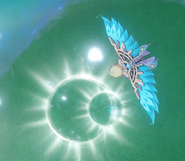