Inazuma City, Narukami Island, Inazuma
In the Inazuman arts of sword-making, there is the tradition of the "Raiden Gokaden," five schools of the craft, of which the Amenoma Art is one. They will have no part in any cheap tricks in their smithing technique. Nay, they have only time for only boundless passion and willpower, which they pour into every hammer-stroke — thus are the Amenoma Art's works known throughout the entire Inazuman martial scene!
World Map description

Anemoma Smithy (Japanese: 天目鍛冶屋 Amenoma Kaji-ya) is the weapon shop and forging station in Inazuma, located on the eastern end of Inazuma City. Its members practice the Amenoma Art, one of the bladesmithing schools in the Raiden Gokaden.

The Amenoma Smithy shop menu can be accessed by speaking to Hajime. He has identical stock to Wagner and Master Zhang. 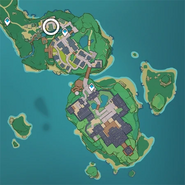 The Amenoma Art (Japanese: 天目流 Amenoma-ryuu, "Heavenly Eye Art") is one of the five schools in the Raiden Gokaden, Inazuma's five bladesmithing schools.

After Iwakura Doukei defeated Teruyo in a duel, he went on to establish the Iwakura Clan. He had the Amenoma master at the time forge a blade that would be passed down to each inheritor of the "In" title. This blade, the "Hakuen Michimitsu Amenoma," disappears following Iwakura Mitsunari's death during the Iwakura Art's Downfall, while the Amenoma Kageuchi, a second copy of the sword, was given by Doukei to the Saimon Clan and is later given to the Traveler.[1][2]

The Amenoma Art is the only school that emerged completely unscathed during Scaramouche's revenge plot against "the bladesmith," which likely refers to Mikoshi Nagamasa, whom he came into conflict with at Tatarasuna around 500 years ago.[3]