A New Star Approaches is the third act in Chapter I of the Archon Quests. It was released in Version 1.1 on November 11, 2020.

Having received an invitation from Ningguang to the Jade Chamber through the Liyue Qixing's emissary, Ganyu, the Traveler and Paimon search for a way there at Mt. Tianheng. They initially find a mechanism and use it, but it does not take them as far as they expected. The Traveler then remembers the Guizhong Ballista that Zhongli had repaired while hunting for the non-existent cocogoat. Arriving at the ruins, they find the Millelith standing guard outside. Paimon panics and believes that Ningguang had lured them into a trap, causing a fight.

The Traveler defeats the Millelith just as a young woman approaches and asks what is going on. Learning that the two "had designs" on the ballista, the Traveler tells her that they were looking for a way to the Jade Chamber. The woman then introduces herself as Keqing and realizes that they are Ningguang's guests. She tells them that the Millelith are here because someone had magically repaired the ballista in a single day, when it had been standing in disrepair for a long time. Keqing explains how to access the Jade Chamber and departs.

Paimon then remembers that they still need to give a gift to Ningguang per tradition, and suggests making a tasty slime snack. The Traveler obtains the ingredients and saves a man from Treasure Hoarders. Grateful for the rescue, he sends word back to his boss to allow them to take some items for free. With a gift now in hand, they head to Yuehai Pavilion to ascend to the Jade Chamber, where they are greeted by Ningguang. She gracefully accepts Paimon's gift and offers one in return, before speaking at length about various subjects, including deities, archons, and the Fatui. Paimon suggests looking at the board and finds a special paper, heading to some ruins where they find evidence that the Fatui were researching the Sigils of Permission.

With the business at the Jade Palace wrapped up, they meet up with Zhongli at Dihua Marsh to continue preparing for the Rite of Descension. Zhongli tells them that they need wild Glaze Lilies. While searching for the flowers, they encounter Ganyu again and discover that she is one of the adepti, having watched over Liyue Harbor since its inception 3,700 years ago. After hearing her thoughts about Rex Lapis' passing, they return to Liyue Harbor, only to find it in chaos.

The adepti and Qixing have finally confronted each other directly, and at the same time, Ningguang has started cracking down on the Fatui. Zhongli learns from Felix that the Millelith have begun questioning the Wangsheng Funeral Parlor due to their ties with the Fatui, prompting Zhongli to leave the Traveler to assist Hu Tao, but not before telling them to look for Childe.

Realizing he must have gone to the Golden House in pursuit of the Exuvia's corpse and the Gnosis amidst the chaos, the Traveler heads there and duels him. During the battle, Childe manages to get close to the Exuvia and plunges his hand into its chest, only to come up empty-handed. Childe mistakenly believes they have the Gnosis and demands they relinquish it to him; as the Traveler does not have it, he take it as a refusal and prepares to fight them. During the fight, the Traveler manages to force him to unleash his Delusion and then his Foul Legacy Transformation technique. Despite his advantages, he is ultimately bested and returns to normal. He remarks on how he only realized just now it was impossible for them to have the Gnosis and how Signora's report on them was completely off, but does not inquire into the latter further.

Switching to his backup plan, despite his distaste for it due to involving innocent bystanders, Childe releases the Sigils of Permission the Fatui replicated to summon Osial, an ancient god that Rex Lapis had sealed underneath Guyun Stone Forest. In the face of this new threat, the adepti and Qixing put aside their differences to fight the common enemy.

To fight Osial, the group uses the Guizhong Ballistas, with the Cloud Retainer, Mountain Shaper and Moon Carver manning them. As they do so, portals open and release Fatui subordinates onto the platform, intent on destroying the ballistas. Keqing leads the Millelith, while the Traveler is blessed by Xiao, Ganyu and Madame Ping. They manage to repel the Fatui assault, upon which the three adepti on the ballista fire a powerful shot at Osial, but it does not flinch and destroys them and the platform in retaliation. Xiao narrowly saves the Traveler in the process. With no other choice, Ningguang decides to sacrifice her Jade Chamber, using its massive weight to crush the ancient god into the bottom of the ocean.

With the threat dealt with, the adepti and Qixing settle their differences and the Rite of Parting proceeds as planned. However, this still leaves one question; where is the Geo Archon? The Traveler seeks out Zhongli and finds him at Northland Bank, speaking to none other than Signora and Childe. He reveals himself as not only the Geo Archon but also the one who instigated the entire series of events, starting with his supposed assassination at the Rite of Descension, as a test to see whether Liyue could continue without him. In exchange for a yet-unknown ultimate goal, he forged the "contract to end all contracts" with the Tsaritsa; satisfied with the outcome, he hands his Gnosis to Signora. The two Harbingers and former Archon soon leave the bank.

Sometime later, the Qixing host the Rite of Parting, which the Traveler attends as they overhear rumors about the battle against Osial, the Fatui's involvement, and hears the official story from the Qixing. Keqing, grateful for the Traveler's assistance in stopping Osial, asks them what they would like as a reward; to her surprise, they simply ask to help put up missing posters for their missing sibling. After talking to several attendees, they speak to Zhongli about Liyue's future. Zhongli, aware of the Traveler's plans, tells them that the next nation, Inazuma, has been sealed off and its archon, Baal, has issued a Vision Hunt Decree, surmising that his "death" will cause her to advance her plans even further. He tells the Traveler that although the nation may be shut off for the time being, they should not give up and try to find a way in. 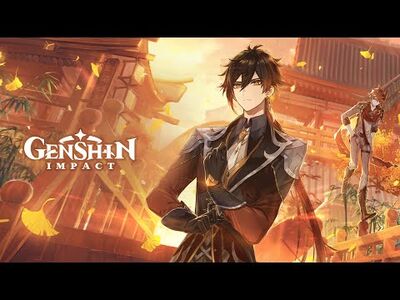 The seven victors of the Archon War once gathered to dine in Liyue. But godhood changed hands as two millennia went by, and five of those seven have now passed.

Now, as the spirit of the sixth, Rex Lapis, returns to the heavens, an ancient god encroaches upon Liyue once more. A new star shall violate the divine sanctum, even as the city quails under the dark tides...