Genshin Impact Wiki
Register
Don't have an account?
Sign In
Advertisement
in: Removed, Past Events, Events,
and 4 more
English

"The Promise of a Worldly Encounter" Fan Art Submission Contest

"Every journey has its final day."
This page contains information about a past event that may or may not return in a future version. 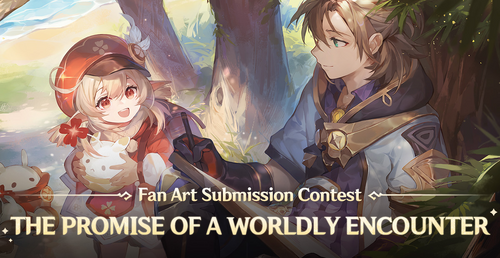 This Submission Contest will introduce a new voting feature. Click on the "Vote" button next to the submitted works at the bottom of the page to vote for your favorite works~

Note: Each Traveler has 20 votes per day, and can only vote for the same work once.

Q1: Can PlayStation players participate in the event? A1: Yes, you can link your account according to the following announcement: https://www.hoyolab.com/genshin/article/533197