In the distant past, this was the beloved spear of a famed Inazuman bandit.

"The Catch" is a 4 star Polearm obtained from the Inazuma Fishing Association. It cannot be sacrificed to enhance another weapon as it can only be claimed once.

"The Catch" and its refining material Ako's Sake Vessel can be purchased from the Inazuma Fishing Association.

1 Shops that sell "The Catch":

The favored barbed spear of a famous Inazuman bandit.
It was originally a harpoon used to catch fish, but it was also very handy in battle.
They say that he even pierced the enchanted, sword-armed puppet before carrying it off.

"Haha! Once, I was the master of this ship, the 'Seiraimaru.'"
"I commanded over ten ships, and they called me the Deathless Oni of Seirai."
"Now, I am but a leaf floating upon the waves."
"If not for Janome and the people marooned on those islands,"
"Forget raising our sails again — I doubt I would have managed to make it back to my home shores."
"And yet Seirai now looks like this."
"There is no longer any place for me in the Inazuman Islands."
"Even that naggy, fretful old shrine maiden is gone..."

The bandit named Ako Domeki's voice was thick with emotion. Then he said...
"Hey, Janome! I'm now the freest man in the whole wide world!"
"Aunt Shrine Maiden! Didn't you say that you wanted to go see the world?"
"You know, go someplace else, like that Kamuna guy or that Konbumaru you always talk about?"
"You know what? Let me, Ako Domeki Zaemon, go in your stead!"
"Let me go see what the edge of the world really looks like!"

"We'll meet again where all ship routes end!"[Note 1]
"And when we do, it'll be my turn to tell you all about these distant lands!"

"The Catch" was originally wielded by Ako Domeki. 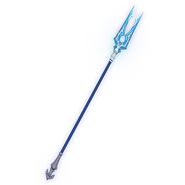 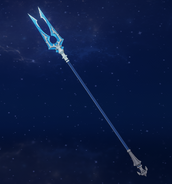 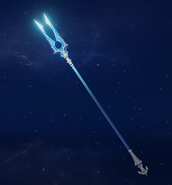